My wife and I drove to Bentonville, AR over the weekend to see the Dale Chihuly exhibit at Crystal Bridges. Being an outdoor exhibit, we thought it would be nice as the trees are in the opening stages of turning Fall colors. In the end I think we should have waited until Mid-November to time it just right. I highly recommend taking a day trip to see it, but the exhibit isn’t as extensive as I thought it might be.

The works are spaced out along a wooded path that runs perhaps a half-mile or so. Though I’ve always liked Chihuly’s work, I think this display fell short of his high standards. However, after saying that, there were pieces that I found to be very impressive. My favorites were the strange, puffy, dandelion-like flower and the tree growths.

The term dandelion is probably the best word to describe the large, puffy, flower-like creation about half-way along the path. From a distance it looks “soft” or “fuzzy” or “puffy.” Up close you can see the glass edges and it becomes more defined.  It has a soft, buttery yellow color at its center and clear at the outside edges, lending to the fuzziness factor. It’s an incredible construction of glass that left me pondering just how Chihuly puts these types of things together.

The tree growths are also strange in that from a distance the work simply looks like yellowish, bulbous shapes in a fork in the tree trunk, and greenish shapes growing around the base of the tree next to the first one. The green shapes have a metallic tint when you view them up close, while the yellowish shapes hang precariously as though the mass had fallen from the sky and landed awkwardly in the gap of the tree trunk, or perhaps grew out of the fork asymmetrically… 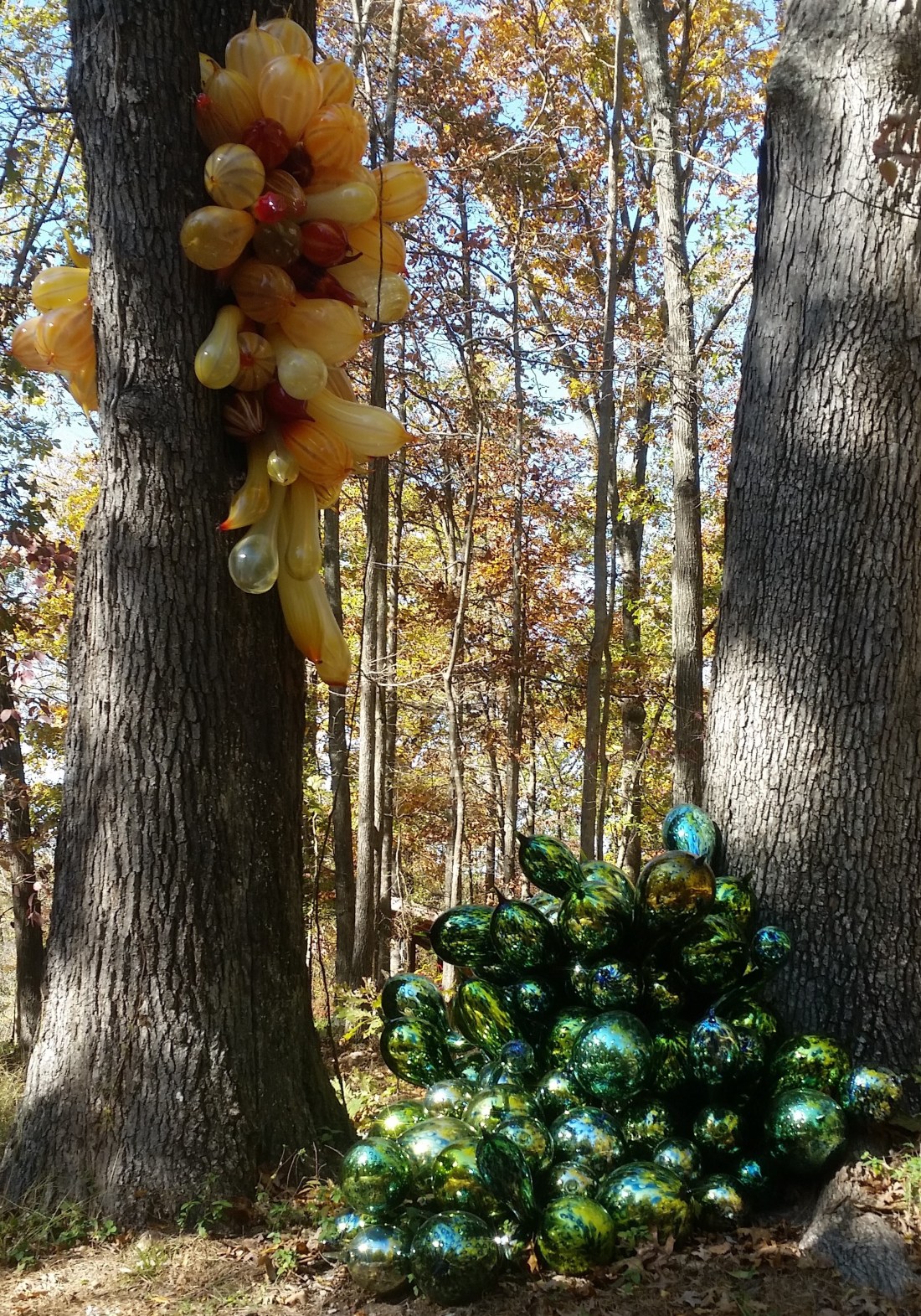 There was a canoe filled with more traditional Chihuly shapes and colors (think Bellagio). There was a neon display that was fantastically intricate, though not very Chihuly-esque in my mind. And there were several areas along the path where the visitor walks past “patches” of blue, or purple, or red glass tubes sticking out of the ground like six foot blades of glass grass. They were pretty and contrasted with the trees nicely, but were my least favorite pieces.

On a different note, I used both Waze and Google Maps to guide me from place to place and found that northwestern Arkansas really confuses both map apps. If you go, be prepared to be given strange instructions that will lead you through neighborhoods and nearly rural areas that made me feel at times like I might be trespassing… Simply telling the driver to “turn around and go back the way you came” just doesn’t seem to be in the programming. I was amazed at how many times this happened and wondered initially if it was just Waze malfunctioning. When Google Maps also misfired I thought it must be NW AR in general. Be prepared to get confused. That’s all.

Evolving into a better me. View all posts by Brian Jenkins